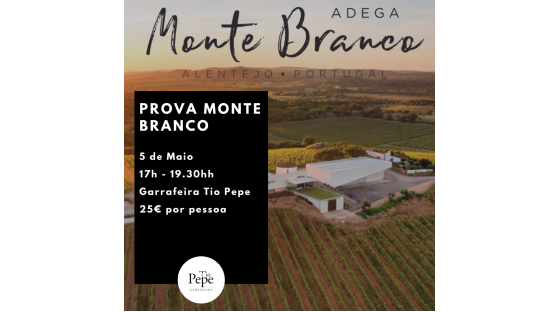 Located at an altitude of 400 meters we find the city of Estremoz. Here comes an Alentejo with very unique conditions: diversified soils, marked by the presence of limestone and shale soils, more moderate temperatures, creating an individual microclimate, where we can create balanced and elegant wines.

In 2004, the Adega do Monte Branco project was born.

The bases are simple: Portuguese grape varieties, authentic wines and respect for Nature. It is in the vineyard that the most important part of our work is centered.

At Adega do Monte Branco, every day they seek to return to the authenticity of what defines the vision of Alentejo. The work involves perfecting what is original: purity of the soil, authenticity of the varieties, more than three thousand hours of sun and a team determined to always try to do better with what we have, continuously progressing on the path of sustainability.

We really want to count on your presence at the next tasting of Garrafeira Tio Pepe, where the place of honor will be occupied by Luis Louro and Inês Capão, producers and winemakers of this wonderful house! 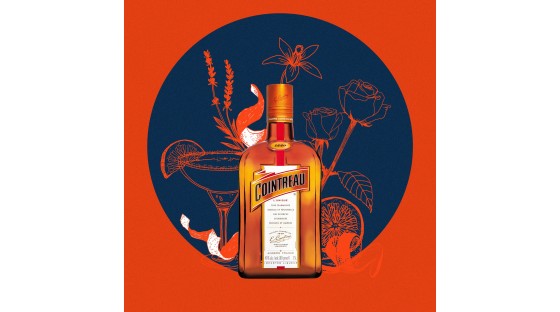 Do you know the history of the mythical Cointreau?

COINTREAU is a delicious orange liqueur that awakens sensations of discovery. Delicious orange aroma, translucent, yet complex, deep and mysterious. Its square bottle is present in almost every bar and restaurant in the world. In addition to being consumed as a digestive, it can also integrate the most varied cocktails, creating a universe full of personality. COINTREAU, with its unique “French touch”, has been popular for almost 150 years without changing a thing, from its legendary bottle shape to its delicate and instantly recognizable flavors. 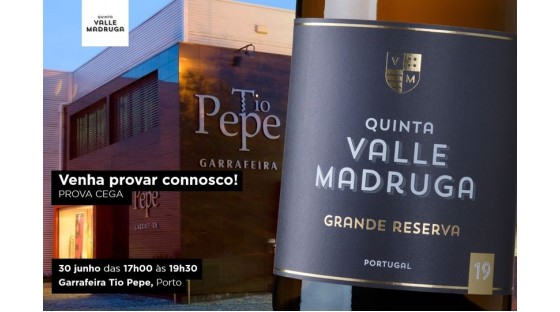 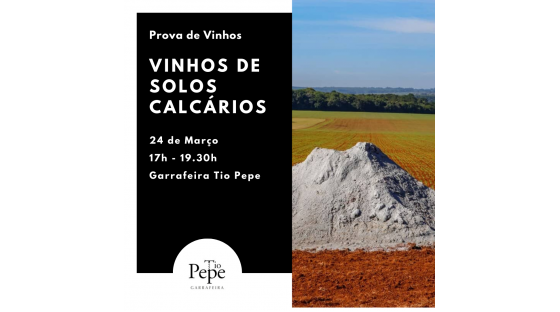 Álvaro and Fernando are the 14th generation of the Van Zeller Family. Its origins date back to the 13th century, to the Flemish cities of Mechelen and Nijmegen, where they owned several properties, namely in the village of Zellaer. It was in the 17th century, during the wars that ravaged northern and central Europe, that the Van Zellers were forced to migrate to Spain and Portugal, countries they later came to call their own. Its connection to the world of wine dates back to the early 17th century. According to the Books of the Inquisition (1220-1640), Jorge Fernandes da Silva and his son-in-law Francisco da Silva Moura – ancestors of the Portuguese part of the family – were the biggest Port wine merchants at the time. These family ancestors are the first known members of 14 consecutive generations dedicated, until today, to the Douro and Port Wine, a fact unprecedented in any other Portuguese family involved in the wine sector.
His father, who dedicated his whole life to the Douro and to Port Wine, decided to continue in the business, this time at his own risk: he stayed with the old Quinta do Noval warehouses in Gaia, which were the genesis of what would become Barão de Vilar – and began to buy Port Wine, since he needed to have a stock of 300 barrels to become a merchant. In turn, Álvaro becomes Master Blender at Caves Calém in 1996, where he stays until 1998. Later, that same year, he joins his brother Fernando to take the reins of Barão de Vilar, a company founded by his father two years before.
The motto is set for a tasting that will be quite didactic and where we will get to know better this house with so much tradition, BARÃO DE VILAR, as well as the wines to which Álvaro Van Zeller gives life!
This tasting will take place at Garrafeira Tio Pepe, Thursday 26th of May, between 5pm and 7.30pm, where you can taste:
KAPUTT Branco – 2ª Edição (Apresentação)
KAPUTT Laranja – 2ª Edição (Apresentação)
ZOM Douro Colecção Tinto 2014
ZOM Douro Grande Reserva Tinto 2011 (Edição Limitada)
VP MAYNARD’S Colheita White 2007
VP MAYNARD’S Colheita White 1989
VP MAYNARD’S Colheita Tawny 2007
VP MAYNARD’S Colheita Tawny 1969
A taste with limited seats and a cost of €20 per person.
Sign up to cliente@garrafeiratiopepe.pt
DO WE COUNT WITH YOU?
Read more
Showing 1 to 5 of 5 (1 Pages)